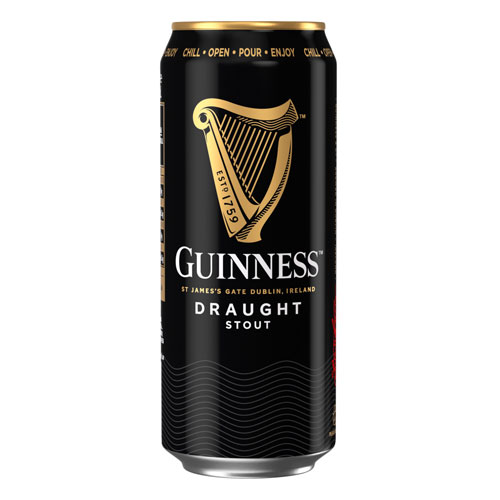 Guinness Beer - Draught Can - NO STOCK

Guinness Beer - Draught Can - NO STOCK

This item is currently NOT available in Ecuador at the moment.  The brand’s owner (Diageo) is not importing this product into the country for uknown reasons.  Once this item becomes available, we will update accordingly.

Guinness Draught Stout is the original nitrogen-infused beer. Although to the uninitiated, it can look dark and heavy, it actually tastes deliciously light and smooth, swirling with notes of roasted barley, caramel, coffee and chocolate. The net result is a flavorful stout that’s as approachable as a lager — which it has long been one of the world’s great pub beers. Another surprise is its low-calorie count, just 126 calories for a 12-ounce serve. That’s just 15 calories less than a typical light beer.

Guinness signed a 9000-year-lease on their brewery back in 1759, so they’ve been around a while and they clearly plan to be around a while longer. Luckily, they have a knack for delicious beers as evidenced by the fact that Guinness was being exported around the world by the end of the 18th century (for a period of time, Guinness was the largest brewer in the world).

For many years (centuries, actually) they focused on stouts. But they’ve always been creative types — opening their first experimental brewery in 1904 and launching Guinness Draught, the world’s first nitro beer in 1959. In 2018, they opened up their Guinness Open Gate Brewery to explore all manner of new beers from sours to IPAs to doppelbocks – all available in the taproom above the brewery.

There are no reviews yet.

Only logged in customers who have purchased this product may leave a review.